Questions 1 – 6 Complete the table comparing the two towns. Write NO MORE THAN THREE WORDS for each answer. 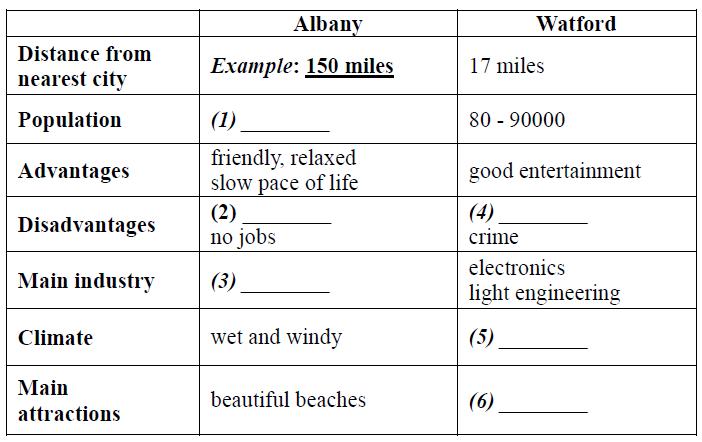 Questions 7 – 9 Write NO MORE THAN THREE WORDS for each answer.

7 – What does Gordon like about where he is living now ? 8 – When does Maureen think she might go back to Albany ?

In Section I you will hear two people talking about the towns where they grew up. First, you will have some time to look at questions 1 to 9

You will see that there is an example which has been done for you. On this occasion only, the conversation relating to this will be played first

– Maureen:  Time goes so quickly — I can’t believe that I will have been here for five years on Saturday.

– Gordon:  That’s a long time. Where did you live before that?

– Maureen:  I lived in a small town, about 150 miles from Perth, on the southwest coast of Australia, called Albany.

Now we shall begin. You should answer the questions as you listen because you will not hear the recording a second time. First, you have another chance to look at questions 1 to 3

Listen carfully and answer questions 1 to 3

– Maureen:  Time goes so quickly — I can’t believe that I will have been here for five years on Saturday.

– Gordon:  That’s a long time. Where did you live before that?

– Maureen:  I lived in a small town, about 150 miles from Perth, on the southwest coast of Australia, called Albany.

– Gordon:  What is it like growing up somewhere that small?

– Maureen:  Well, it has its advantages. People tend to be much more friendly in small towns. You seem to get to know more people. The pace of life is much slower. Everyone seems to have more time to talk, and generally the lifestyle is much more relaxed. On the other hand, small — town life can be pretty boring. Obviously, you haven’t got the same range of entertainments available as in the city, and unless you want to go into farming you have to move elsewhere to look for a job.

– Gordon:  So farming is the main industry then?

– Maureen:  Well, actually, no. There is a lot of sheep and cattle farming and more recently a lot of people have started to grow potatoes. however, the town was first established as a whaling base and although there isn’t any whaling today, most people are still employed by the fishing industry.

– Maureen:  In summer you get some fairly nice days, but it gets very windy. In winter, I guess the average temperature is about 15 degrees Celsius, and it gets really windy and it’s very, very wet.

– Gordon:  Sounds lovely, I can see why you are here.

– Maureen:  Oh come on, it’s not all that bad. It’s got a beautiful coastline, and beautiful beaches. You can drive for about 45 minutes and you will come to absolutely deserted white beaches. You can be the only person swimming there.

– Gordon:  With that wind, I’m not surprised!

– Maureen:  Don’t be like that, we do get some good days. Anyway, where do you come from?

Write the answers to questions 4 to 9

I come from a town called Watford, about 17 miles from the centre of London.

Is it a big town?

– Gordon:  Not really, It has a population of around 80,000 – 90,000 but the whole area is built up so it is hard to say where Watford finishes and the other towns begin.

– Maureen:  Did you enjoy living there?

– Gordon:  Well, being so close to London has advantages. You get the latest films and music. There is always something going on and there is such a wide variety of different people and cultures that it is difficult to get bored. Of course all this has its downside — the cost of living is so expensive and most people can’t really afford to go out very often. So although the entertainment is available you’ve really got to have a lot of money to enjoy it. Another problem is like most big cities there is a lot of crime and there are areas of London that are very dangerous.

– Maureen:  What are the main industries in Watford?

– Gordon:  Well, of course a lot of people commute (into London but there is also a lot of local industry. Before desktop publishing, Watford used to be the centre of the printing industry in Britain. Also, there used to be a big factory manufacturing helicopter engines but that closed down about two years ago. Nowadays, I suppose the biggest industries are electronics and light engineering.

– Maureen:  I suppose that it gets a lot of snow being in England?

– Gordon:  Not really. It usually snows once a year and it rarely lasts for more than two or three days. The weather is mainly cold and wet. Sometimes you get a light rain that lasts for weeks.

– Maureen:  It’s a bit like Albany there. Is there anything you particularly miss about living there?

– Gordon:  Near my parents’ house there is a large park. Must be about 10square milesin size and it has a canal and a river running through the middle of it. Some good walks, you can go fishing and there are good sports facilities. Sometimes I miss that.

– Gordon:  I don’t know, I’m quite happy here at the moment. I like the weather. It’s great to get up in the morning and know that it is going to be sunny. What about you?

– Maureen:  Probably, but not for a long time yet. At the moment I enjoy the excitement of the city. My work and most of my friends are here and it is nice to know that there are so many facilities available. However, I think that Albany might be a good place to retire. It’s safe and it’s easy to make friends there.

– Gordon:  Yeah I’m going to be here for a while too. I have just signed a new contract for my job which means that I’ll be living here for at least another five years.