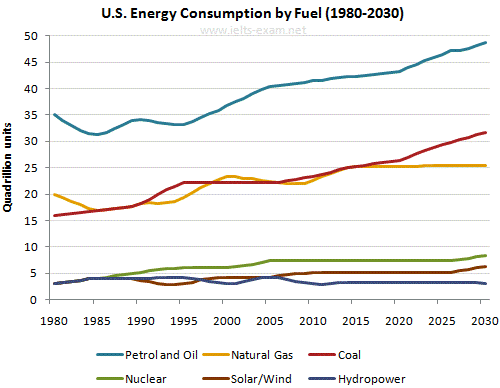 This graph is a line graph provide us information about U.S energy Consumption from 1980 to 2030. From 1980 to 1985,Hydropower, Nuclear, Solar Wind was less used while Petrol and Gas was the most popular. From 1990 to 2010 there was some fluctuation in the using rate of every type of energy except Petrol and Oil. From 2010 to 2030 there will have been an dramatic increase in the using rate of every type of energy. As the world population is booming, people need more energy to survive. Therefore, each energy type using rate will keep rising. But still, as known from decades ago, Petrol and Oil still the most used energy and is expected to reach 47 Quadrillion Units in the year 2030.

In conclusion, energy is crucial to human’s life so the using consumption will never stop rising. Especailly new types of energy coal or nuclear power.

In the first period, from 1980 to 1985, it is obvious from the given information that in 1980, Petrol and Gas was the most popular type of energy with 35 Quadrillion units while natural gas, coal and hydro power account for 20,15 and 4 quadrillion units respectively. On the contrary, nuclear power and solar wind energy were not used at that time.

Nuclear power were introduced in 1985 since then, the implement of it has spread in a wide range. As a result, its consumption level has not stop rising ever since. Solar wind and Hydro power are in the same situation too.

In conclusion, as human technology depends largely on sources of power, US energy consumption by fuel will be unlikely to drop in the future.

The graph shows consumption of energy in the U.S. since 1980 with projections through 2030.
The historical trends showed Petrol and Oil as the major sources of fuel, rising from 35 quadrillion (35q) units used in 1980 to 42q in 2012. Despite some fluctuation between 1980 and 1995, there was a steady increase, which is expected to continue, reaching 47q in 2030.

Consumption of energy from natural gas and coal followed a similar pattern over the period. From 20q and 15q respectively in 1980, gas showed an initial fall and coal saw a gradual increase, with the two fuels equal between 1985 and 1990. Consumption has fluctuated since 1990 but both now provide 24q. Coal consumption is projected to rise to 31q in 2030, whereas after 2014, natural gas is forecast to remain stable at 25q.

In 1980, in the group of renewable source, energy from solar/wind, nuclear, and hydropower were the least-used, with only 4q. Nuclear has risen by 3q, and solar/wind by 2. Since 2005, hydropower has fallen back to the 1980 figure. It is expected to remain approximately constant through 2030, while the others are projected to rise gradually after 2025.

Overall, fossil fuels are predicted to remain the chief energy source for the US, with a little bit of hydroelectric, nuclear and a smidgen of renewable sources like wind and solar.

View all posts by ielts4everyone