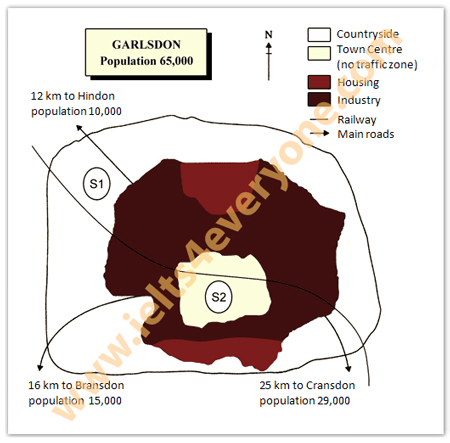 The map below is of the town of Garlsdon. A new supermarket (S) is planned for the town. The map shows two possible sites for the supermarket.

Summarise the information by selecting and reporting the main features, and make comparisons where relevant.

According to the map, the railway surrounds the city and intersects the city almost in the middle. There are main roads for transportation and countryside surrounds the main housings and industries of the city. The housing of the city is mainly in the North and South sides of the city and the town center is in the middle of the industrial area. The first possible location for the planned supermarket is near the Hindon area where almost ten thousand inhabitants live and the location is in the north-west corner. This location would be ideal for the Hindon people for shopping but the people of Crandon and Brandon, which have great more population, would be far away from this supermarket. The second possible location which is almost in the centre of the city would be surrounded by industrial zones and housings in North and South sides of the city. This would be an ideal place as it would connect all the shoppers in the three parts of the city. Since the railway passes near this location, this would be a better place in terms of communication as well.

In summary, the second location (S2) would be a better place for the supermarket between the possible two locations though the first location would be advantageous for the people of Hindon area and would be out of crowd.