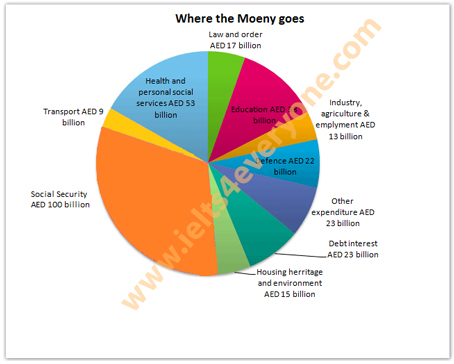 The pie chart gives information on UAE government spending in 2000. The total budget was AED 315 billion.

Summarize the information by selecting and reporting the main features, and make comparisons where relevant.

According to the pie chart, the UAE government spent AED 100 billion in social security among their total budget of AED 315. This single sector cost the UAE government almost one third of the total budget. This year the government spent 53 million on health and personal social services which was the second largest sector in terms of expenditure made by the UAE government in this year. 38 million AED was spent on education while 23 billion was spent both in debt and other expenditures. The government spent 22 billion in Defence sector while 13 billion was spent for the industry, employment and agriculture sectors. The lowest money spent was in transport sector which was only 9 billion. Finally 15 billion of the budget was spent on housing and environment.
In summary, UAE government’s maximum spending went in social security and healthcare sectors while the least amounts were spent on transport, law and order, housing and industry/agriculture and employment sectors.