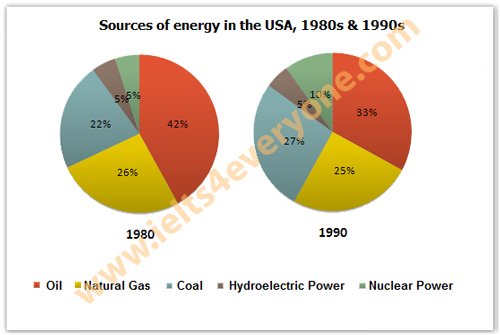 Write a report for a university lecturer describing the changes which occurred.

According to the given data, oil was the main energy source in the USA which was 42% in 1980. The second largest energy source in this decade was the natural gas which supplied 26% of total energy in the same period. Then coal supplied more than 20 percent energy demand in USA while hydroelectric power and Nuclear power both supplied 5% of the total energy.

In the next decade, the Nuclear power produced one tenth of total energy demand and that was almost double that it was in the previous decade. The hydroelectric power as an energy source remained unchanged as it provided 5% of total energy demand in this decade also. The two other main sources for energy in the USA remained almost unchanged in this decade and those two sources were Coal and Natural Gas. Finally the use of oil as an energy sources reduced to 33%, which is almost 10% less than the previous decade, but remained the largest source albeit the reduction in this 90s decade.

In summary, the use of oil and coal had reduced and their places as energy sources were replaced by the use of Nuclear power in the USA.