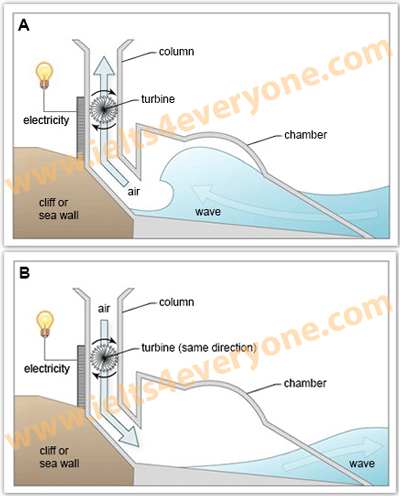 The diagrams show a structure that is used to generate electricity from wave power.

Summarise the information by selecting and reporting the main features, and make comparisons where relevant.

According to the give pictorial, the electricity producing machine works in two ways. Firstly, the structure is places near a sea so that the wave water gets inside the chamber and creates an air pressure that would rotate the turbine placed inside a column. The rotation of the turbine produces electricity which is stored in the cells and this electricity can be passed and used. The whole structure is placed near the sea, adjacent to a cliff or sea wall.

The second illustration depicts how the electricity can be produced using the ebb tide of the sea. During the ebb, the water gets off from the chamber and the air pressure is created again from the opposite direction and this rotates the turbine. The rotation of the turbine produces electricity and supplies it to the storage.

In summary, the electricity can be produced using a structure near the sea and both the tide and ebb tide is used to rotate the turbine to produce the electricity.