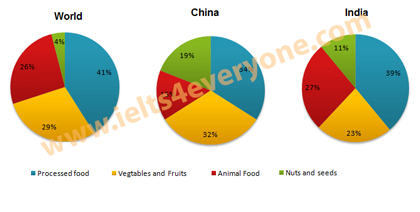 The pie charts show the average consumption of food in the world in 2008 compared to two countries; China and India.

Write a report to a university lecturer describing the data.

The given pie charts show the average food consumption of the world and two countries with large population namely China and India for the year 2008. As is observed from the given data, processed food items were consumed in the highest percentage by the people than other food items.

According to the pie charts, people of the world as well as China and India ate processed food more than any other food item. People ate almost 41% processed food in the world in 2008. This percentage was higher in India than China.  On an average 29% vegetable and fruits were consumed by the people of the world while this percentage was 32% in China and 23% in India. Foods from animals were the third largest consumed item and Indian ate more than world average. Nuts and seeds consumed in India and China was much higher than the world average.