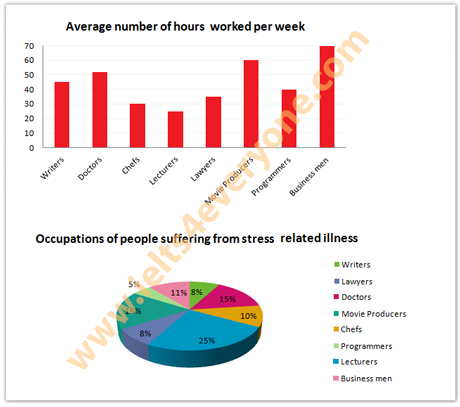 The graphs show figures relating to hours worked and stress levels amongst professionals in eight groups.

Describe the information shown to a university or collage lecturer.

Interestingly, though the lecturers work less hours per week, they suffer from stress related illness more than other professionals. On an average, lecturers are one-fourth among those stress related ill people. Movie producers and Doctors suffer from this illness and their percentages are 18 and 15 consecutively. Though businessmen works more working hours, their percentage of suffering from the stress related illness is only 10% which is lesser than the lecturers, movie producers and doctors. Programmers, writer and lawyers suffer the least amounting less than 10% of total number.

In summary, the working hours is not directly related to the stress and illness from it as some professional who works less working hours suffer more in stress related illness.